Jacob Wobig Political Science
Hello and welcome to my website!

I am an associate professor in political science at Wingate University in Wingate, North Carolina.  The courses I teach are a mix of international politics and comparative politics.  Sometimes I tell students that the classes I teach are about politics within and between foreign countries.  My academics interests focus on international and comparative human rights and democracy.  I did my Ph.D. at the University of Nebraska, where I wrote my dissertation on international treaties by regional intergovernmental organizations to support democracy in their member-states.  My more recent research has examined recent trends in human rights around the world.  We are in a "rights recession" in which many human rights are being restricted by governments around the world.  I am trying to understand why.

In addition to my teaching role, I also am  the advisor to the Wingate Model United Nations team.  They have been a very successful bunch over the last 6 years and I am very proud of their accomplishments. 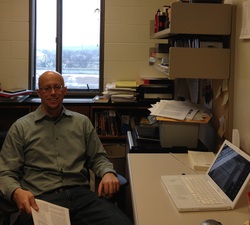 Prior to grad school I was an attorney in Lincoln, Nebraska where my practice was split between insurance defense and issues of administrative and constitutional law.  I frequently get asked why I quit the law and the reason, simply put, is that I did not like making other people's arguments for their money.  I have tremendous respect for attorneys, both in terms of the intellectual difficulty of the job and the social import of their work, but that kind of work just doesn't mesh with me.  At core I'm a teacher and a scholar.

The full biography is that I grew up in a small ranching town in western Nebraska called Valentine, and I attended the University of Nebraska - Lincoln to study political science and international relations.  After graduating in 2001 I went to the University of Iowa College of Law, where I became Editor in Chief of the Journal of Transnational Law and Contemporary Problems.  My interest in politics was already firmly entrenched by this time and through undergrad and law school I worked as a volunteer in about half a dozen campaigns for local and statewide offices (ask me sometime about my story about the Dean Scream).  After law school I worked as an attorney in Lincoln, Nebraska for 3 years.